This is coming with a total of 33 calories, 6 grams of carbs (2 of which are fiber) and 3 grams of protein.

Kale contains very little fat, but a large portion of the fat in it is the omega-3 fatty acid called alpha linolenic acid.
Given the incredibly low calorie content, kale is among the most nutrient dense foods in existence. Eating more kale is a great way to dramatically increase the total nutrient content of your diet

…Anyhow, I have ended up here in Malaysia. And to my great surprise, there is no kale here. As you describe in Paris, here they don’t know what it is, and there is no name for it. I eventually found “Chinese kale,” aka “Chinese broccoli,” which is actually not kale but something called kai lan. It is a relative of the broccoli family, with small flowers that look like miniature unformed broccoli florets. Turns out it is actually a kai lan/broccoli cross that we know in the U.S. as broccolini. It took me a while to actually come to the realization that I wasn’t just missing kale in this store or that store. I finally met someone working in a produce section here that had spent some time in the States. He enlightened me that no store in Malaysia will have it. 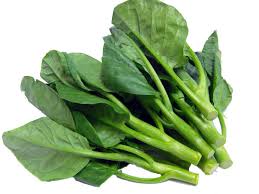